This tutorial gives insights about CNN2SNN for users who want to go deeper into the quantization possibilities of Keras models. We recommend first looking at the user guide and the CNN2SNN conversion flow tutorial to get started with CNN2SNN.

The CNN2SNN toolkit offers an easy-to-use set of functions to get a quantized model from a native Keras model and to convert it to an Akida model compatible with the Akida NSoC. The quantize and quantize_layer high-level functions replace native Keras layers into custom CNN2SNN quantized layers which are derived from their Keras equivalents. However, these functions are not designed to choose how the weights and activations are quantized. This tutorial will present an alternative low-level method to define models with customizable quantization of weights and activations.

Unlike the standard CNN2SNN flow where a native Keras model is quantized using the quantize and quantize_layer functions, a customizable quantized model must be directly created using quantized layers.

The CNN2SNN quantized neural layers are:

They are similar to their Keras counterparts, but have an additional argument: quantizer. This parameter expects a WeightQuantizer object that defines how the weights are discretized for a given bitwidth. Some quantizers are proposed in the CNN2SNN API:

If those quantizers do not fit your specific needs, you can create your own (cf. 2. Weight Quantizer Details).

The QuantizedSeparableConv2D layer can accept two quantizers: one quantizer for the pointwise convolution and a quantizer_dw for the depthwise convolution. If the latter is not defined, it is set by default to the same value as quantizer.

The quantize function is a high-level helper that automatically replaces the neural layers with their corresponding quantized counterparts, using MaxPerAxisQuantizer. The ReLU layers are substituted by QuantizedRelu layers.

How a weight quantizer works

The purpose of a weight quantizer is to compute a tensor of discretized weights. It can be split into two operations:

For Akida compatibility, the weights must be discretized on a symmetric grid defined by two parameters:

When training, the weight quantization is applied during the forward pass: the weights are quantized and then used for the convolution or the fully connected operation. However, during the back-propagation phase, the gradient is computed as if there were no quantization and the weights are updated based on their original values before quantization. This is usually called the “Straight-Through Estimator” (STE) and it can be done using the tf.stop_gradient function.

How to create a custom weight quantizer

The CNN2SNN API proposes a way to create a custom weight quantizer. It must be derived from the WeightQuantizer base class and must override two methods:

To be able to correctly train a quantized model, it is important to implement the STE estimator in the quantize function, by using tf.stop_gradient at the quantization operation.

If there is no need for the optional transformation in the custom quantizer, the CNN2SNN toolkit gives a LinearWeightQuantizer that skips this step. The quantize function is already provided and only the scale_factor function must be overridden.

Why use a different quantizer

Let’s now see a use case where it is interesting to consider the behaviour of different quantizers. The MaxQuantizer used in the QuantizedDense layer of our above model discretizes the weights based on their maximum value. The default MaxPerAxisQuantizer has a similar behaviour with an additional per-axis quantization design. If weights contain outliers, that are very large weights in absolute value, this quantization scheme based on maximum value can be inappropriate. Let’s look at it in practice: we retrieve the weights of the QuantizedDense layer and compute the discretized counterparts using the MaxQuantizer of the layer. 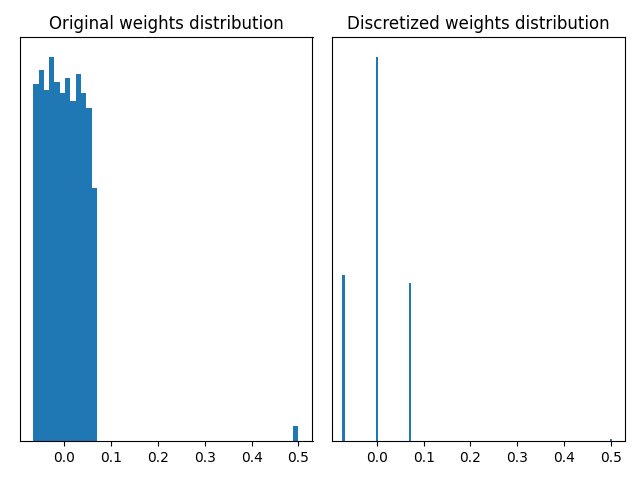 The graphs above illustrate that a MaxQuantizer applied on weights with outliers will keep the full range of weights to discretize. In this use case, the large majority of weights is between -0.1 and 0.1, and are discretized on only three quantization values. The outliers at 0.5 are preserved after quantization. If outlier weights don’t represent much information in the layer, it can be preferable to use another weight quantizer which “forgets” them.

The two graphs above show that using a quantizer based on the standard deviation can remove the outliers and give a finer discretization of the weights between -0.1 and 0.1. In this toy example, the MaxQuantizer discretizes the “small” weights on 3 quantization values, whereas the CustomStdQuantizer discretizes them on about 13-14 quantization values. Depending on the need to preserve the outliers or not, one quantizer or the other is preferable.

In our experience, the MaxPerAxisQuantizer yields better results in most use cases, especially for post-training quantization, which is why it is the default quantizer.

A quantized activation layer works as a ReLU layer with an additional quantization step. It can then be seen as a succession of two operations:

The linear activation function is defined by (cf. the blue line in the graph below):

The quantization operation is defined by one parameter: the bitwidth. The activation function is quantized using the ceiling operator on 2^bitwidth - 1 positive activation levels. For instance, a 4-bit quantized activation gives 15 activation levels (plus the zero activation) uniformly distributed between zero and the maximum activation value (cf. the orange line in the graph). 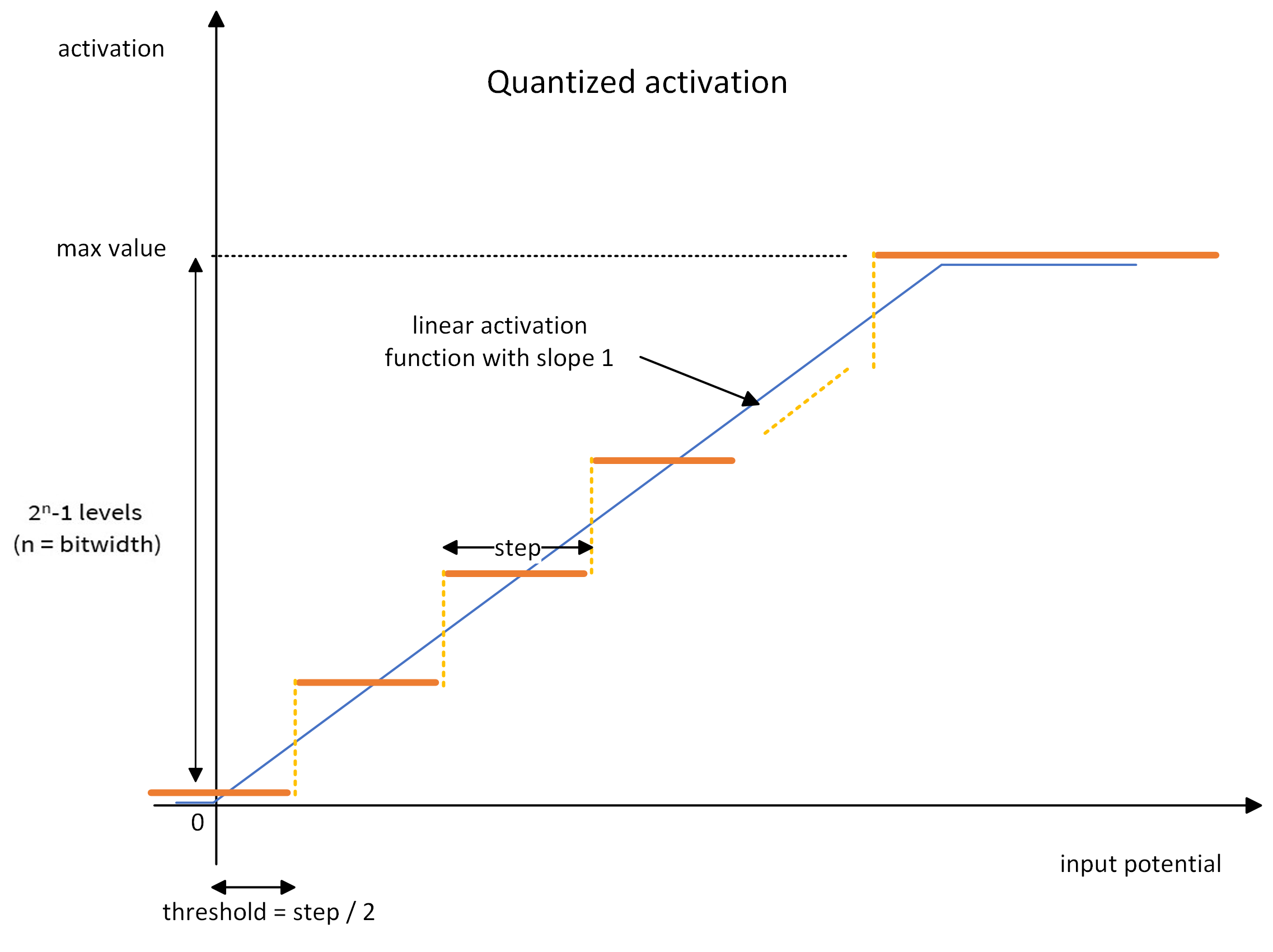 During training, the ceiling quantization is performed in the forward pass: the activations are discretized and then transferred to the next layer. However, during the back-propagation phase, the gradient is computed as if there were no quantization: only the gradient of the clipped linear activation function (blue line above) is back-propagated. Like for weight quantizers, this STE estimator is done using the tf.stop_gradient function.

4. How to deal with too high scale factors

A quantized Keras model may have sometimes very high scale factors, i.e. very small weights, in the neural layers. During conversion into an Akida model, these scale factors are used to compute the Akida fire thresholds and steps required for Akida inference. However, these fire thresholds and steps are limited in memory on NSoC. It may happen that their values are too big to fit into memory and then a Runtime Error occurs at Akida inference, e.g. Runtime Error: Error when programming layer 'separable_8': Backend Hardware(CNP): 1246278 cannot fit in a 20 bits unsigned integer.

If you’re facing this issue, it is necessary to retrain your Keras model to avoid too high scale factors in the neural layers. One possible reason for these high scale factors is the presence of very small gammas in BatchNormalization (BN) layers. Indeed, when folding BN layers into their preceding neural layers, the weights corresponding to tiny BN gammas become in turn very small, which leads to high scale factors. The akida_models package provides a tool to add constraint on BN gammas: the gammas are clipped to a minimum value of 1e-2: the gammas cannot be smaller than this threshold. The code snippet below illustrates how to use the provided tool. Note that it must be applied on the Keras float (or quantized) model before folding BN layers.

The new model can then be trained using compile() and fit() and quantized if needed. The trained model will not have BN gammas less than 1e-2, which is valuable to avoid very high scale factors.