BrainChip’s Akida integrated circuit technology is an ultra-low power, high performance, minimum memory footprint, event domain neural processor targeting Edge AI applications. In addition, because the architecture is based upon an event domain processor, leveraging fundamental principles from biological SNNs, the processor supports incremental learning. This allows a deeply trained network to continue to learn new classifiers without requiring a re-training process. Due to the highly optimized architecture, the Akida Neural Processor eliminates the need for a CPU to run the neural network algorithm and in most cases eliminates the need for a DRAM external to the neural fabric. The elimination of external devices makes the Akida solution significantly more power efficient compared to deep learning accelerators which require both external CPU and memory.

Built around a mesh-connected array of neural processor units (NPUs) the architecture is highly scalable to meet the needs of a wide range of applications. The uniqueness of the BrainChip Akida Architecture lies in the ability of the hardware to run traditional feedforward, deeply learned CNN networks as well as native SNN networks. This documentation provides examples of how to develop both classes of solutions, using industry standard tool flows and networks, to solve a variety of application problems such as vision, acoustic, cybersecurity amongst others.

The Akida neural processor is available both as Intellectual Property (IP) circuit design for integration in ASIC products or as a System on a Chip (SoC) product.

As Figure 1 shows, the SoC is built around a core neural processor comprised of 80 neural processing units, it includes a conversion complex and allows one to run popular convolutional neural networks (CNNs) such as MobileNet 1. Designers can use the Akida SoC to run industry standard CNNs, dramatically reducing power by changing convolutions to event based computations, or run native SNN solutions.

The Akida chip includes several key features that differentiate it from other neural network processors and deep learning accelerators. These are:

Figure 2 shows several examples of IP configurations that could be envisioned. Because the architecture is based upon a neural processing unit which is arrayed and mesh connected, the number of NPUs per solution is dependent upon the application need. 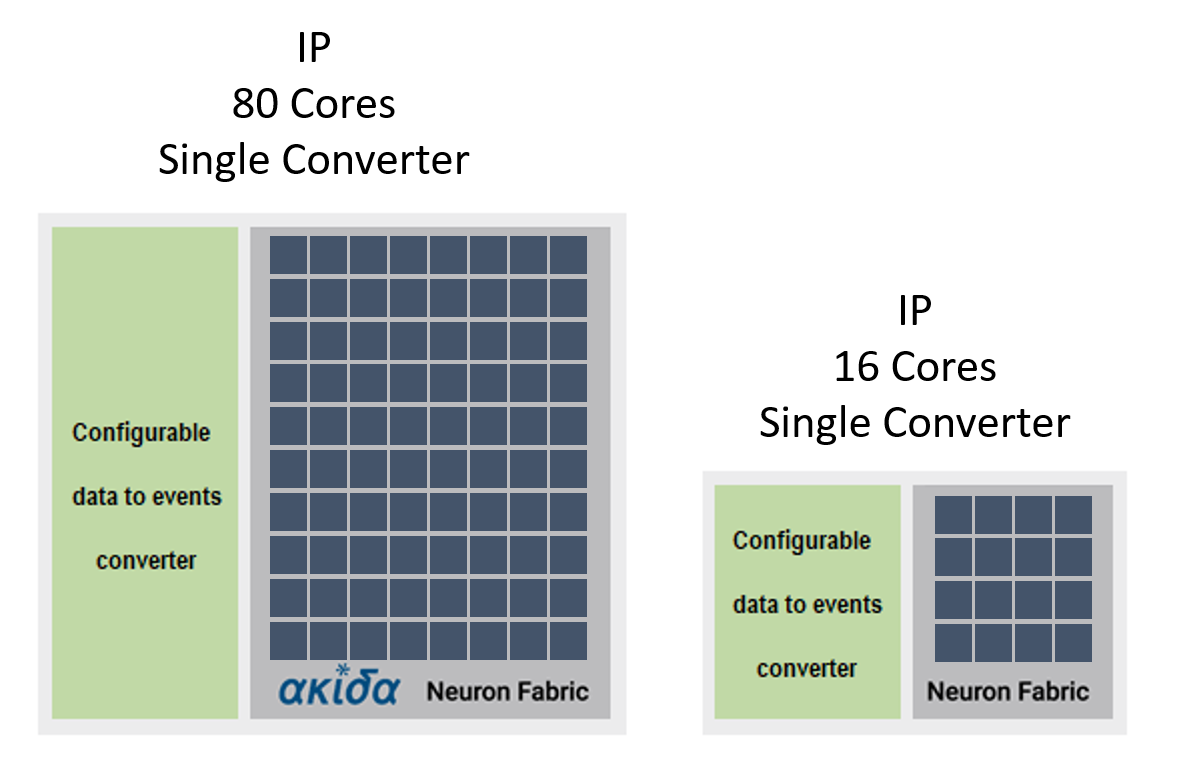 The Akida Neuromorphic ML Framework (MetaTF) relies on a high-level neural networks API, written in Python, and largely inspired by the Keras API.

The core data structure used by the Akida Execution Engine is a neural network model, which itself is a linear stack of layers.

Throughout this documentation, those events will often be referred as “spikes”, due to their close similarity with the signals exchanged by biological neurons.

While the Akida examples are provided under an Apache License 2.0, the underlying Akida library is proprietary.
Please refer to the End User License Agreement for terms and conditions.

In most cases the entire network can be accommodated using the on-chip SRAM. Even the large MobileNet network used to classify 1000 classes of ImageNet fits comfortably.